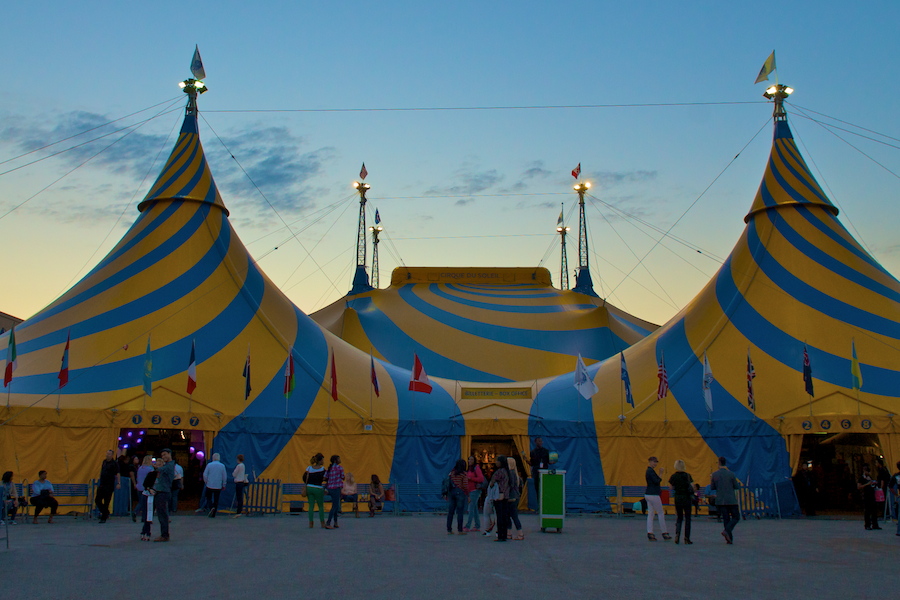 Photos and Review by Taylor Wallace!

You could tell upon entrance to the blue and yellow tents that this dress rehearsal along with everything else around the grounds is taken very seriously and with the utmost detail and attention.  Right after having an extremely nice and outgoing usher show us to our seats we were greeted by parts of the cast, who roam the crowd before show time acting their individual character part.  This was a fun way of passing by time while everyone else found their seats.

The show begins with an intense scene that immediately demands every spectator’s attention. Aerial stuntmen drop in while an enormous jungle looking center piece is risen from floor to ceiling, signifying that all that happens underneath it’s shadows for the rest of the evening will be completely magical and mind blowing.

The first section covers everything from comical sketches to jaw dropping stunts. My personal favorite during this section was a group of five ladies who ride unicycles that are about 10 ft from the ground. While cycling around the stage they toss bowls to each other, catching them on their head and feet. This seamed to be one of the most complicated, intricate and original stunts of the night.

The intermission last for about 30 minutes, giving patrons adequate time to refresh a beverage or just catch up on what was just witnessed.  Then the second section begins just as quickly as the first, again with the rising of the jungle piece.  An easy highlight in the latter section was a couple dressed in Native American attire who roller skate atop a drum and perform twirling maneuvers that seem inhuman.

Overall this was an amazing show that I highly recommend for almost anyone who loves the arts, live performance and an incredible atmosphere.  The live band was also a very nice addition to the over performance of the evening.  So go check out Totem today!