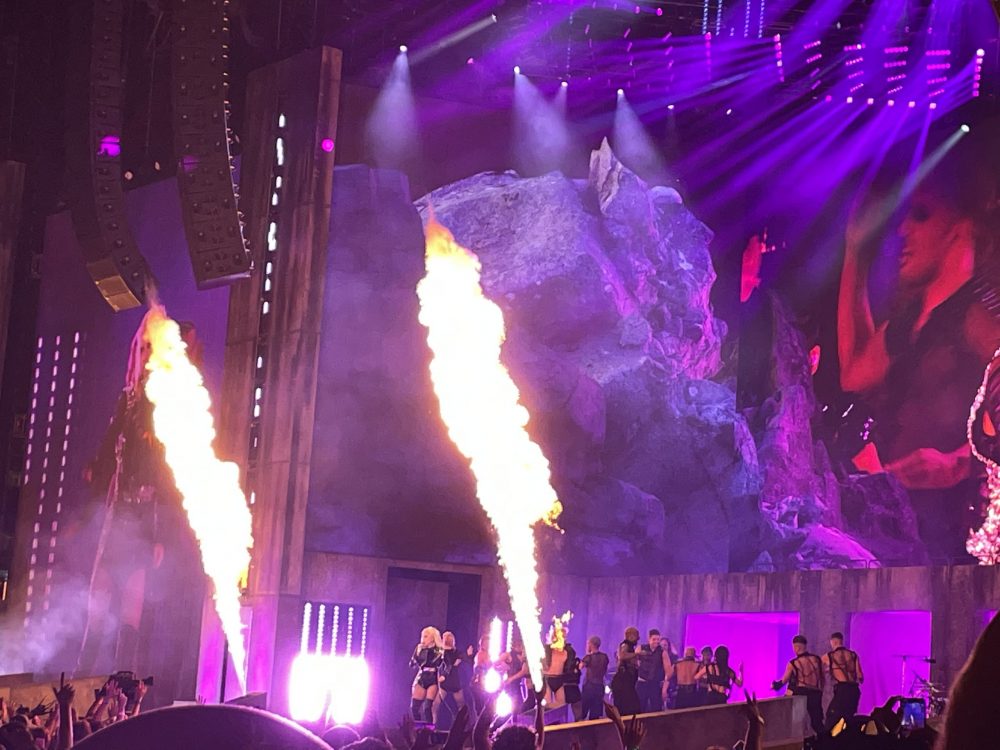 On Friday night, August 26th, at Truist Park Lady Gaga put on a stellar performance for  tens of thousands of her fans that certainly did not disappoint. Hoards of fabulously dressed  people in a sea of glitter, spandex, fishnets, and mile high platform heels poured into the  stadium. Lady Gaga’s dedicated followers of all ages, shapes and sizes were decked out in all  their finery. The excitement and anticipation was in the air as thick as Georgia’s late summer humidity. In the midst of all this elation, it was a bit of a shock to see and hear a few protestors  trying to shame us for attending the show. They said we could never find salvation or hope in  Lady Gaga, and a member of the crowd roared back the response, “YES, Lady Gaga does spread  hope!”, and I would have to enthusiastically agree. Nothing could put a damper on the fabulous time that was about to be had.

The concert was structured as an elaborate Broadway theatrical production including a  prelude, 4 acts, complete with a finale, and a fantastic encore. Gaga’s performance began with  an opening instrumental crescendo. Then she punched us in the face right out of the gate with  three of her biggest early hits: “Just Dance”, “Bad Romance”, and “Poker Face”. Although she opened with familiar favorites, Gaga’s album “Chromatica” was definitely the focus of the show.  Act I included the songs “Alice”, “Replay”, and “Monster” was the final tune of this act when she  encouraged everyone to get their claws up! The songs “911”, a provocative performance of  “Sour Candy”, “Telephone”, and “Love Game” followed in Act II. In Act III, she moved from the  main stage to stage B in center field, performing “Babylon”, “Free Woman”, and “Born This  Way” which she began acoustically with piano accompaniment, building up to a full band version. Act IV was the longest of the acts including the songs “Shallow”, “Always Remember Us  This Way”, “The Edge of Glory” and “Angel Down” both done acoustically with piano  accompaniment, followed by “Fun Tonight” and “Enigma”. In Act IV, Lado Gaga spoke  passionately about the protection of women’s rights and the abortion controversy before  singing an emotional “Angel Down”. She also spoke about the hard times all of us were forced  to endure during Covid and how it was frightening to even be around our loved ones. She expressed the joy we are feeling now that we are able to be together and we should hold on tight to those we love.

The show began to wind down with the finale which included the songs “Stupid Love” and “Rain On Me”. The chanting crowd persuaded Gaga to come out for an encore of “Hold My  Hand”. No one could deny that Lady Gaga knows how to put on a stellar performance. She  exuded strength and power in all her vocals while always maintaining pitch perfection. Her  wardrobe was characteristically over the top and gorgeous, futuristic, completely glamorous,  and always super sexy. There were video breaks in between acts and songs to allow for quick  wardrobe changes. The 2 giant video screens on each side of the main stage enhanced her  performance, with highly stylized, floral artistic images of Gaga at her best. There were also  thrilling burst of flames shooting out of the stages towards the heavens. You could feel the heat  literally and figuratively. The show conjured up a lot of emotion, and I looked around at many  faces with tears streaming down their cheeks. Lady Gaga’s music does indeed spread hope, love, a sense of community, tolerance, and courage. She is an inspiration to millions of people, and everyone should see her perform live at least once in their life.

Words and Photos by Laura Gaston